One of the things I like to do in the kitchen is test new food ideas. Though it had never occurred to me before to describe my forays in detail, the internet has created an environment where the rule of the land is “The world revolves around you.” That’s me! So here’s a classic soup cobbled together one night. The essential elements are the despair and loneliness felt after returning home to your one-bedroom apartment after a 14 hour day at school and finding nobody there but yourself. 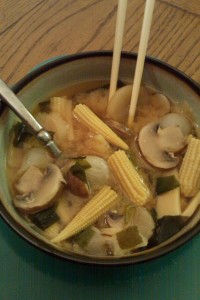 The soup is basically a bunch of canned and dried things, slightly resembling a dinner one might get with Chinese takeout.

The stock is basically dashi powder with a little hungarian paprika and black pepper. I added some dried bonito flakes because I like it extra fishy. The miso and the egg just add a little texture and protein to the broth. Only two of the ingredients were truly perishable, and they helped guide me. Cooking based on what you have and need to get rid of is a lot like composing, where one must work with a set of rules and restrictions that vary from piece to piece.

Looking back, my soups and my compositions seem to share the similar problem of trying to pack too much into too little. I have even more congested soups that I might dredge up on some other occasion. Similarly, there is a choral piece with 16 distinct voices that I have decided never to look at again. The decision is always one of blending all the flavors, or having them mingle independently.