In the middle of a movie, I decided that I wanted a snack. Rather than turn to greasy popcorn, I opted to make something a little healthier. I had some leftover bowtie noodles from kasha varnishkas that I made a few weeks earlier. Something about bowtie noodles just makes me feel so silly eating them. I guess that lends a sort of imaginary lightness to this pasta snack food. After boiling the noodles, I mixed in the tiniest pat of butter, just to keep them from sticking together too much. I found a suitable bowl, and in the center placed a small dish which I filled with soba sauce. (When in doubt, soba sauce is probably your best bet. The sweetness pairs with almost everything. If you’ve ever seen people beg for tempura sauce at restaurants, then you know what I’m talking about.) Keeping the sauce dish in the bowl removes the chance of making a mess while dipping. This is especially important when practicing the fine art of dining on your couch. 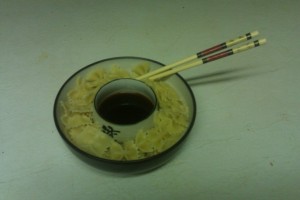 The noodles didn’t take that long to cook, and the soba sauce is just store-bought. The combination of the room temperature sauce with the warm noodles was very satisfying.

My sacred task completed, I returned to watch the remainder of my movie.