Elinor KP has dedicated hiking trails, bike trails, horse trails, mixed trails, and also includes the Forest Meadows sports complex. The trailheads are aligned such that you can cross over into Maclay’s Lake Overstreet trail if you wish (especially useful when biking). There are three main loops with some crossover trails, comprising around 6.5 miles.

My friends and I had a lot of fun hiking in this area. It’s always nice to have dedicated hiker trails, as they’re usually much more interesting. There are many areas where one can wander off the path and explore the trees and creeks and plant life. Like most parks in Florida, water runs all through the forest. Some of the creeks were older and dried up, but others were flowing. The path usually follows along the sides of these creeks, but if you’re not afraid of a little mud you can ease up next to them for a better look. 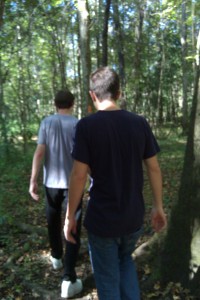 The Lost Boys, led by Stephen, march through the forest.

The scenery was very green and lush when we went. Large horse chestnuts dotted the ground, creating miniature ball-pit hazards if you weren’t looking. The signage in the park is pretty poor it seems, as we found ourselves in unexpected places a few times. GPS takes the threat out of being lost, but better markers would definitely help. (This is one of the parks I plan to map with GPS next time I get a chance.) We only covered two of the three loops, but with our constant wandering and exploring we were there for several hours. 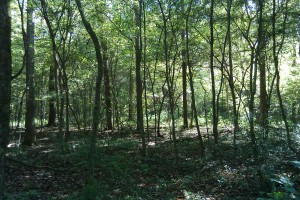 At some point in the trail we found and old dried creek with rusting storm drains. The creek was pretty far below the edges, with the trail on one side and nothing on the other. Previous adventurers had repurposed an abandoned electric utility wire to make a rope swing. Naturally, some of us had a go. Curtis was the most successful in that endeavor. On the other side, we accidentally stumbled into what appeared to be some private property. So it goes with manged tracts of land. The park was originally donated, so I’m sure other parts of it are intended to be off-limits as well.

One of the other great activities here was tree climbing. A number of older trees were downed, looking very enticing like cylindrical balance beams. Other trees were still standing and good for going vertical. We had some fun with number of them. The rains made some of the surfaces quite slippery, and a fair warning to those who would attempt to emulate: downed trees are on their way to becoming top soil. As such, they can collapse without notice. Always check the integrity of the log and its supports before attempting anything. As a side note, those hikers equipped with Five Fingers will find that balancing is a cinch. 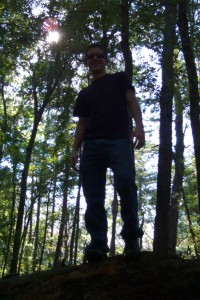 Curtis, experiencing the rush of power one gets atop a tree.

Destinations: D1: If you find that old creek bed… D2: Check the GPS on the second photo. That was a nice place.

The other two photos are also geo-tagged. Check it out!

This is one of my favorite trails. Has more incline than some of the others in the area, but still Florida Flat. Not too hard, but a solid hike if you go all the way though. Be mindful of the trail markers and try to remember where you are so you can time your return.