West of Tallahassee lies the Lake Talquin state forest. The area actually includes quite a few hiking trails, but there is a small trail near a recreational area that I decided to explore with a friend.

Driving west on Blountstown highway, you eventually come to a road called Jack Vause Landing. If you follow it down there is a part of Lake Talquin with a big waterfront area, a pavilion, and a short “interpretive trail”. When I see the words “interpretive trail” I naturally think about traipsing through the woods performing interpretive dance, however this is not the intended definition. Nor is the reality, which is usually more along the lines of “This is a really short trail, so you better do a lot of wandering around if you want to be out here for an hour.” This isn’t a real trail, but rather more of a bonus feature of the recreation area nearby. 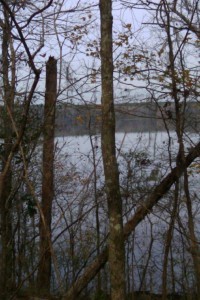 The lake is actually a man-made reservoir created by a dam built in 1927. As a result, the Ochlockonee River swells over the floodplains to form the lake. At first blush, the name Lake Talquin seems to be of Native American origin. I believed this for a while, blindly, but later I learned the truth: the name is a combination of the cities that the lake spans, Tallahassee and Quincy. To put it another way, Tamiami : Tampa/Miami :: Talquin : Tallahassee/Quincy. Now that the magic has been drained from the discussion, let us continue.

The trail starts off from the parking lot, near the pavilion. The path follows a loop that wraps around a small peninsula and then back towards where you began, like the bite in a loop of rope. You can actually see the other half of the trail as you walk. As I said, this was an “interpretive trail”, so my friend Nigel and I took care to wander around aimlessly. There were a few nice spots to look at the lake, though most of them are heavily obscured by trees. At the northernmost point is the peninsula I mentioned, which is elevated somewhat above the water (be careful leaning over to look at the view). When we were there, the water was gray and metallic. A mist hung over the lake and the skies were clouded over. I got as close to the edge as I could, and it was really cool having the water on all sides. 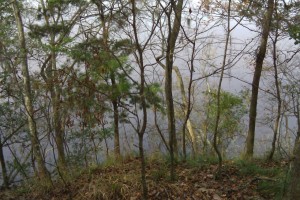 View of Lake Talquin from the peninsula. 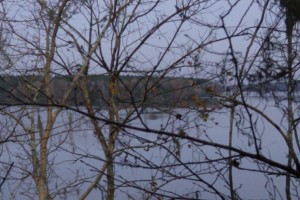 The trail eventually reaches a paved road that you have to cross over to continue–incredibly confusing. By chance we happened to run into the park ranger who lives there, and he showed us the way. I think living in the middle of the forest as a government employee can’t be all that bad. All around, there were so many leaves on the ground that I imagine this trail would be really great when they’re first falling. I realize leaves aren’t so notable, but when you’ve been away from leaf piles for as long as I’ve been, it’s hard to resist running around in them. 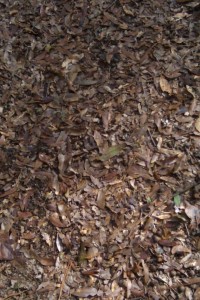 A satisfying crunch, if you get there first.

Destinations: D1: Micro Peninsula, find it in the geotag for the photo. D2: Pavilion at the trailhead with a great lake view makes for a great party location.

The other photos are also geotagged.

As short as the trail was, the beauty of the area makes it a worthwhile adventure. I recommend bringing a picnic and finding a nice spot along the trail to sit and enjoy yourself. There is the normal, nominal entrance fee per vehicle, but if you need a quick trip out of the city, then bring sandwiches and friends and get out there (I recommend stopping by Fat Sandwich and stocking up on your way out). This particular trail and recreation pavilion isn’t on most of the maps I’ve seen, but the official name of the area is the “River Bluff Picnic Site”. I believe there is also a boat ramp there.

If you’re going in the middle of winter on a cloudy day, be sure to bundle up. As cold as it was, gloves and a hat were about all that was required. Of course, neither of us brought gloves. 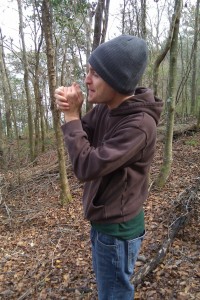